Shipka is a small town in central Bulgaria, known by all the Bulgarian people as it is very important for their history. Maybe Shipka is not top 1st destination for tourists in Bulgaria, but here are many monuments and interesting things to see and it is becoming more and more popular to visit. One of the monuments which is very popular for tourists, is definitely Bouzludja. With its unique form and former function, in the middle of the mountain is surely attractive for the visitors from all over the world.

If you take a bus from Kazanlak to Shipka   is possible to see the building high in the mountains. Its peculiar form attracts a lot of looks. 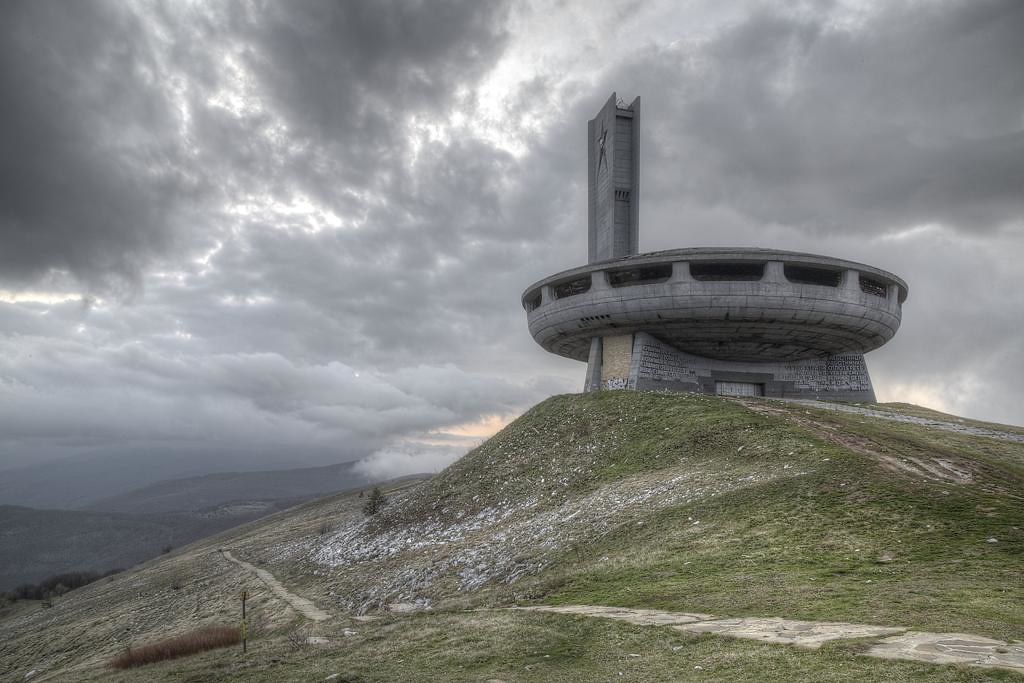 Whith its circular form and a big tower normally the space ship is the first association that comes on people's minds. Behind the very obvious distinctive visual image of it, there is an interesting purpose and usage of it in the communist times.

In the past, more exactly in the year 1868 on the Bouzludja peak (1432 m) happened a battle between the Bulgarian rebels led by Hadji Dimitar and Ottoman Empire. In 1974 the communist regime built a House-Monument of the Bulgarian Communist Party (Informally Bouzludja Monument). They had to reduce the height of mountain for ten meters and more than 15.0000 cubic meters of rock was destroyed during the construction. The project was built at cost of around $35 million.

The monument was opened in the year 1981 and these are the words at the opening of Todor Zhivkov, communist leader of that time: "I am honored to be in the historical position to open the House-Monument [of the Bulgarian Communist Party], built in honor of the accomplishments of Dimitar Blagoev and his associates; who, 90 years ago, laid the foundations for the revolutionary Marxist Party in Bulgaria. Let the pathways leading here – to the legendary Bouzludja Peak, here in the Stara Planina where the first Marxists came to continue the work of sacred and pure love that was started by Bulgaria’s socialist writers and philosophers – never fall into disrepair." Its function was the use for reunions for the comunist leaders.

Despite the fascinating outsides of Bouzludja, you can't miss visiting the insides. If you are an art lover or not you will be amazed about its mosaics which are spread all over the circle-shaped inside wall. They occupy around 510 square meters of space. They represent the history of the Bulgarian communist party. They were built by 35 tons of cobalt glass, but nowadays around 20% or more are destroyed due to passing of time and vandals. The mosaics of the outer side of the circle were built with natural stones gathered from the rivers across Bulgaria. These mosaics are almost vanished because of the natural causes. There is also a mosaic on the ceiling, probabley the most conserved one, a communist hammer and a sickle, encircled by The Communist Manifesto quote: "Proletarians of all countries, unite!" 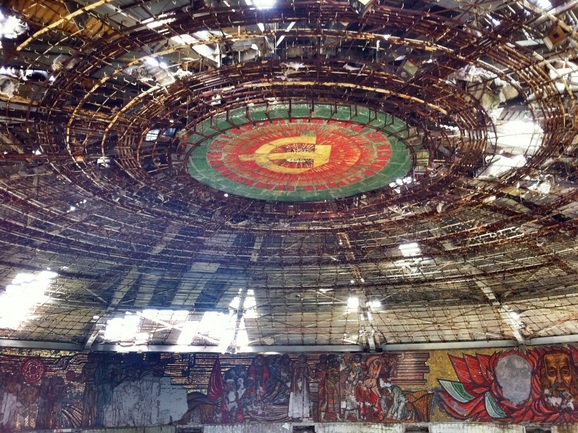 You might find difficult to enter the building, as officially is closed for the public, considered to be dangerous. Even if entering the building is PROHIBITED and you do it on your own RISK, there are many people who do it. There are two holes at the left side of the building where you can enter, but it is quite dangerous and if you are not a real adventurist, is better not to do it.

Recently Bouzludja is not managed by Bulgarian government or anybody in particular which leads to gradual dereliction of it. There are some architectural plans for its renovation but it doesn't seem they will become reality anytime soon. Maybe when it will be too late and once impressive building will become a total ruin.

You can accsess to Bouzludja from two side roads from Shipka pass, either one which goes from Gabrovo or another one from Kazanlak. There are also two (I know two) hiking trails which go to the monument and you can take them directly from Shipka.