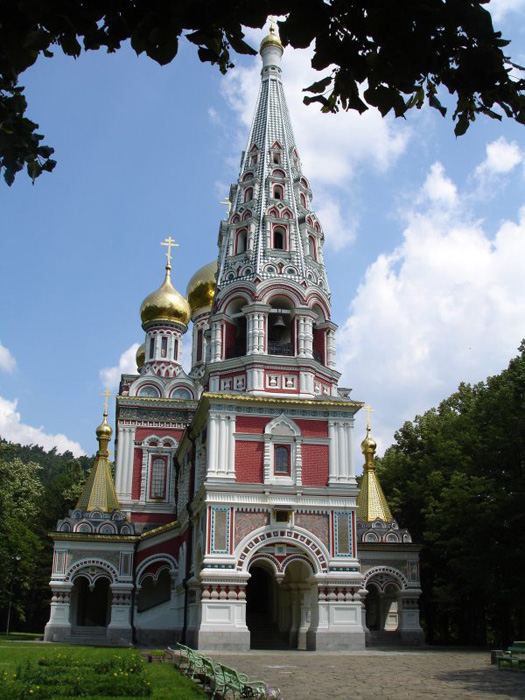 One of the most remarkable, beautiful and impressive monuments in Shipka is the Shipka monastery. It was created as a sign of remembrance and celebration of the Orthodox Russian soldiers and Bulgarian volunteers who gave their lives for the freedom of Bulgaria during the Liberation War.

The temple-monument "Nativity" - Shipka monastery'' is situated at the southern foot of the Shipka mountain in the northwestern outskirts of the city of Shipka, 12 kilometers northwest of the town of Kazanlak.
The monastery was built in the period 1885-1902, in memory of fallen Russian soldiers and Bulgarian volunteers in the Liberation of Bulgaria Russian-Turkish war (1877-1878). More than 450 monuments were built across the country as an expression of gratitude to the liberators, in memory of fallen Russian soldiers, officers and Bulgarian volunteers (volunteers), but Shipka monastery is the largest and most beautiful.

It was built in 1902  upon the initiative of the Civic Committee headed by Count Ignatiev and Olga SKOBELEV  with a clear objective – perpetuating the memory of the fallen officers, soldiers and Bulgarian volunteers- and officially opened on September 28, 1902. The Steering Committee for the construction of the monastery was founded in 1880 headed by Prince Alexei Nikolayevich Tseretelev, Prince Yevgeny Mikhailovich Lihtenberski and others. PA Vasilchikov was elected President and VP Melnitski - Secretary. The initiators appealed to the Russian people for donations and only a year collected 700,000 gold rubles in the campaign included many Bulgarians.